Skip to content
The Sheffield Independent for November 13th 1862 reported that Thomas Brown and William Pitchfork had been charged with an attempt to commit sodomy. The evidence was said to be unfit for publication.

The Derbyshire Courier for January 10th 1863 reported on the Crown Court trials of Wednesday Jan 7th:

Thomas Brown (65), and Wm. Pitchfork (19), the former stated to have been a Methodist local preacher, were charged with sodomy, at Staveley, on the 11th November last. Mr. Stephen prosecuted. The evidence was most revolting. The prisoner Brown harangued the Court, and blasphemously quoted Scripture, and spoke in religious terms.

Not the slightest doubt existed in the case, the prisoner Brown having admitted the offence to Serjeant Brown, Staveley. Brown, in his final defence, with tears, said that if Christ were to call him at once, he believed he should go to heaven, an announcement which was received with the utmost disgust in Court.

Guilty. The Chairman said they had been convicted of the most horrible offence, and he never heard a defence more calculated to disgust than that of Brown. He might mention that they might have been indicted at the Assizes. Brown was sentenced to penal servitude for five years, and Pitchfork for three years.” 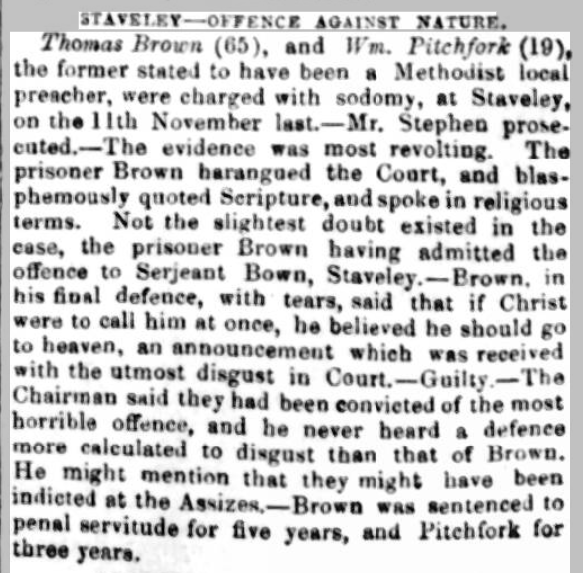 The cases heard before and after were for attempted rape on girls of 7 and 10. The accused in both were given two years imprisonment with hard labour…

In 1851 Thomas was listed as a Wesleyan town missionary and a Wesleyan chapel keeper, and his wife Sarah as a missionary’s wife. This is likely a mention of Thomas in the Sheffield Independent’s report on the 1854 annual social tea meeting of the Wesleyan Methodist Sunday School.

By the time of the 1861 census Thomas was listed as a letter carrier. Now a widower – Sarah having died in 1853 – Thomas lived alone at Smiths Cottages on Speedwell Lane. In his prison records his next of kin is listed as John Brown, a nephew living in Normanton. 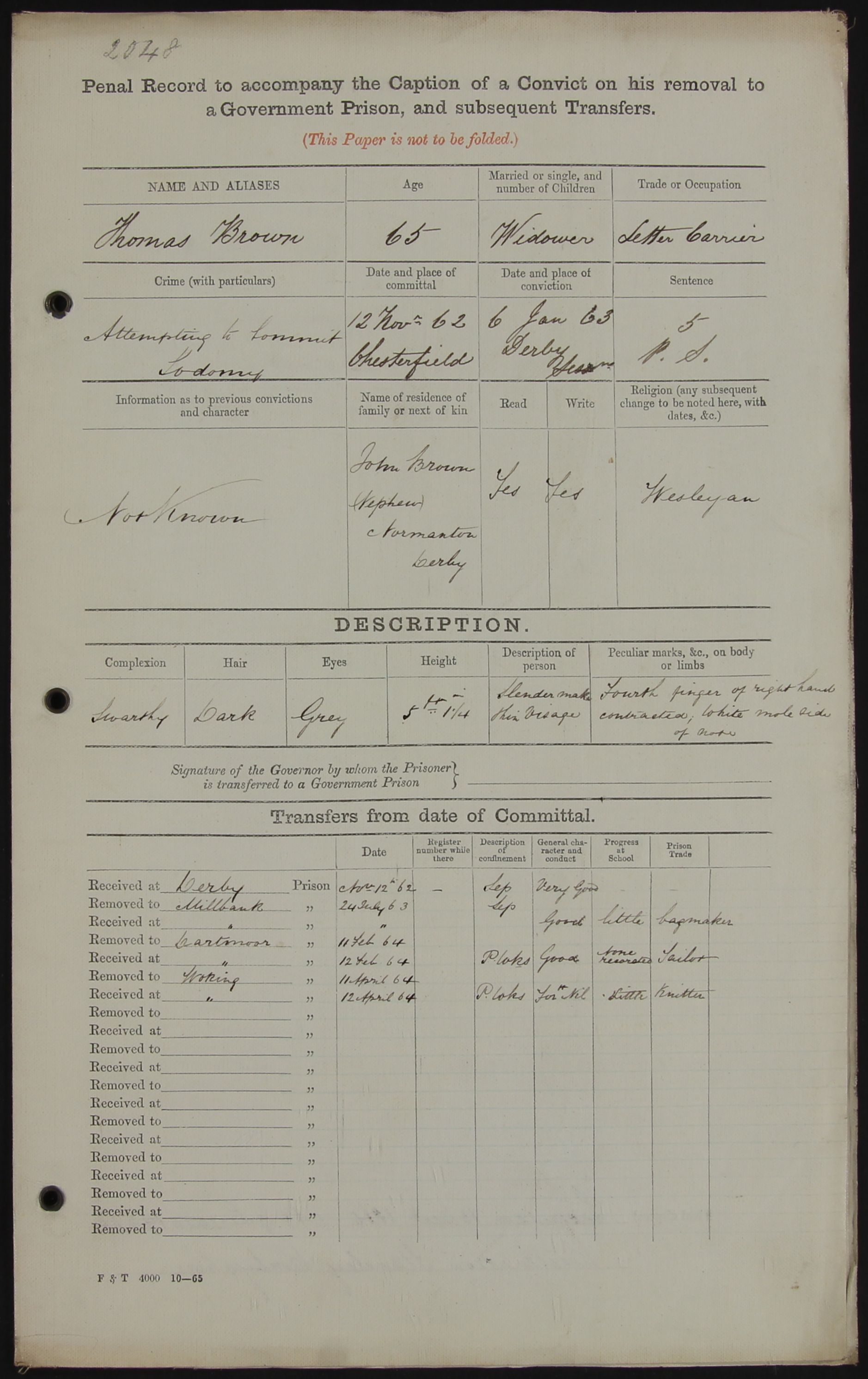 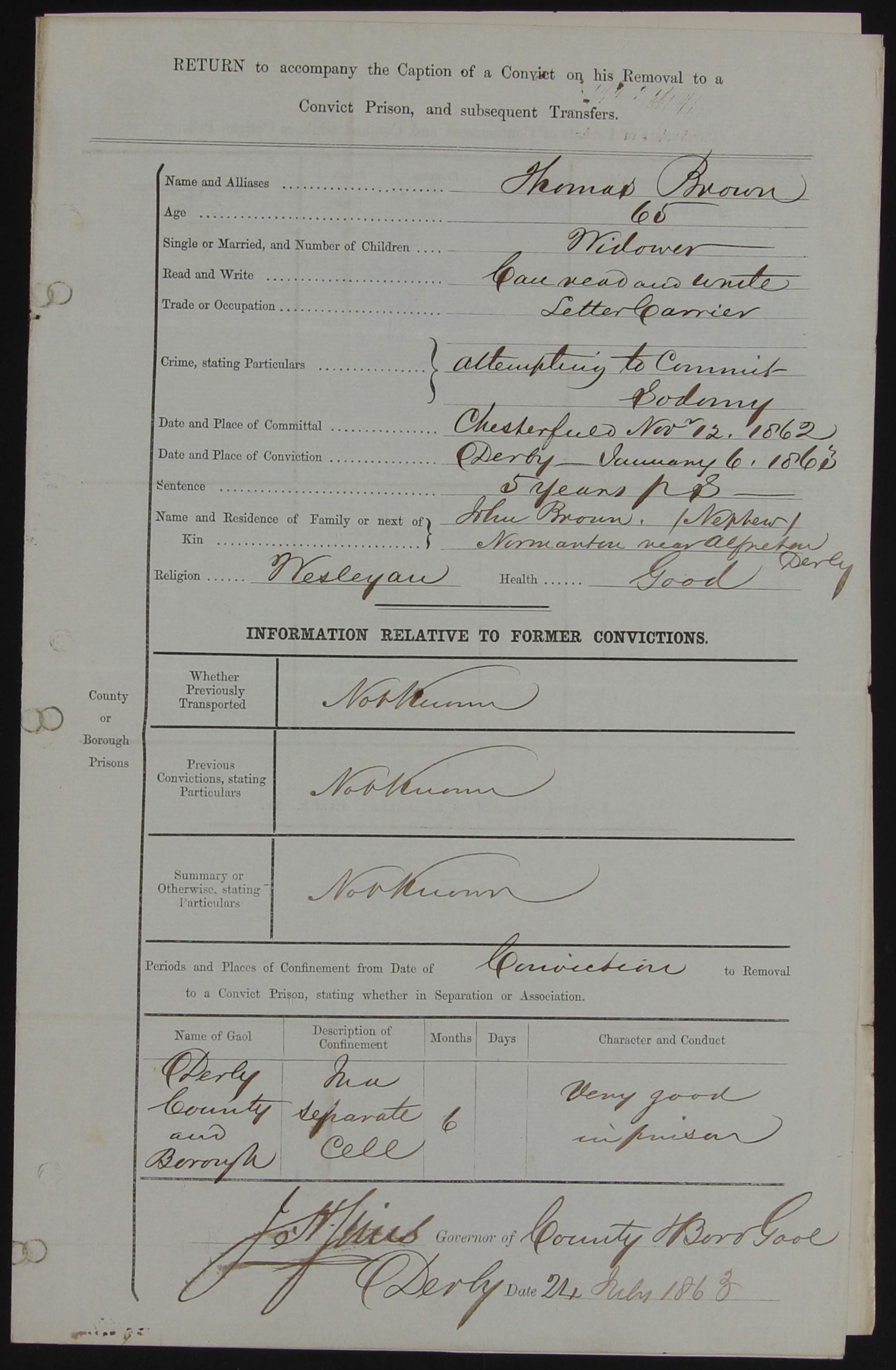 While in prison Brown worked as a bagmaker and a tailor, and occupied himself with writing letters. The governor of Woking prison requested a background check from Chesterfield police into the character of a Mr Bacon in April 1866. The police responded that he was a man of very respectable character. 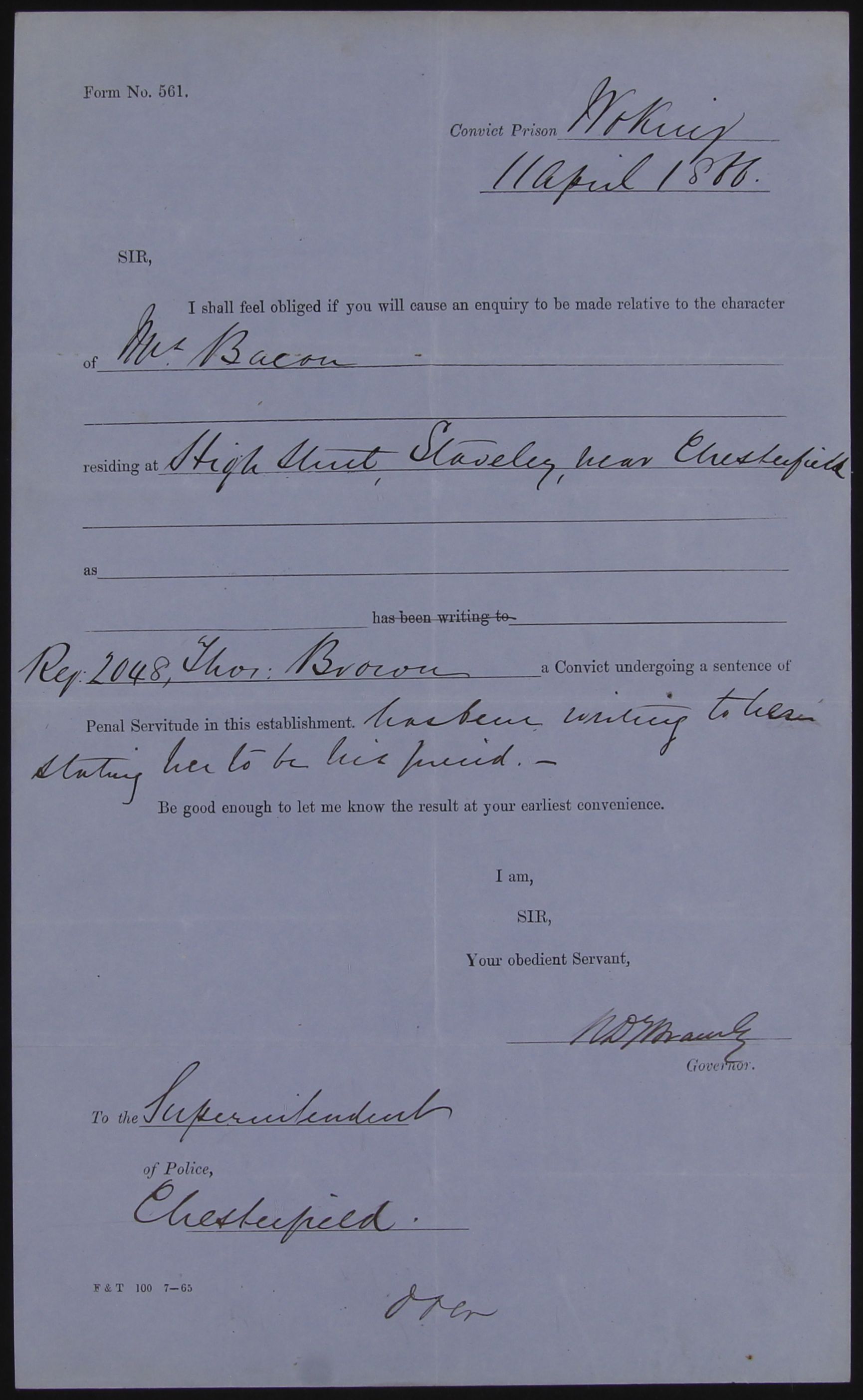 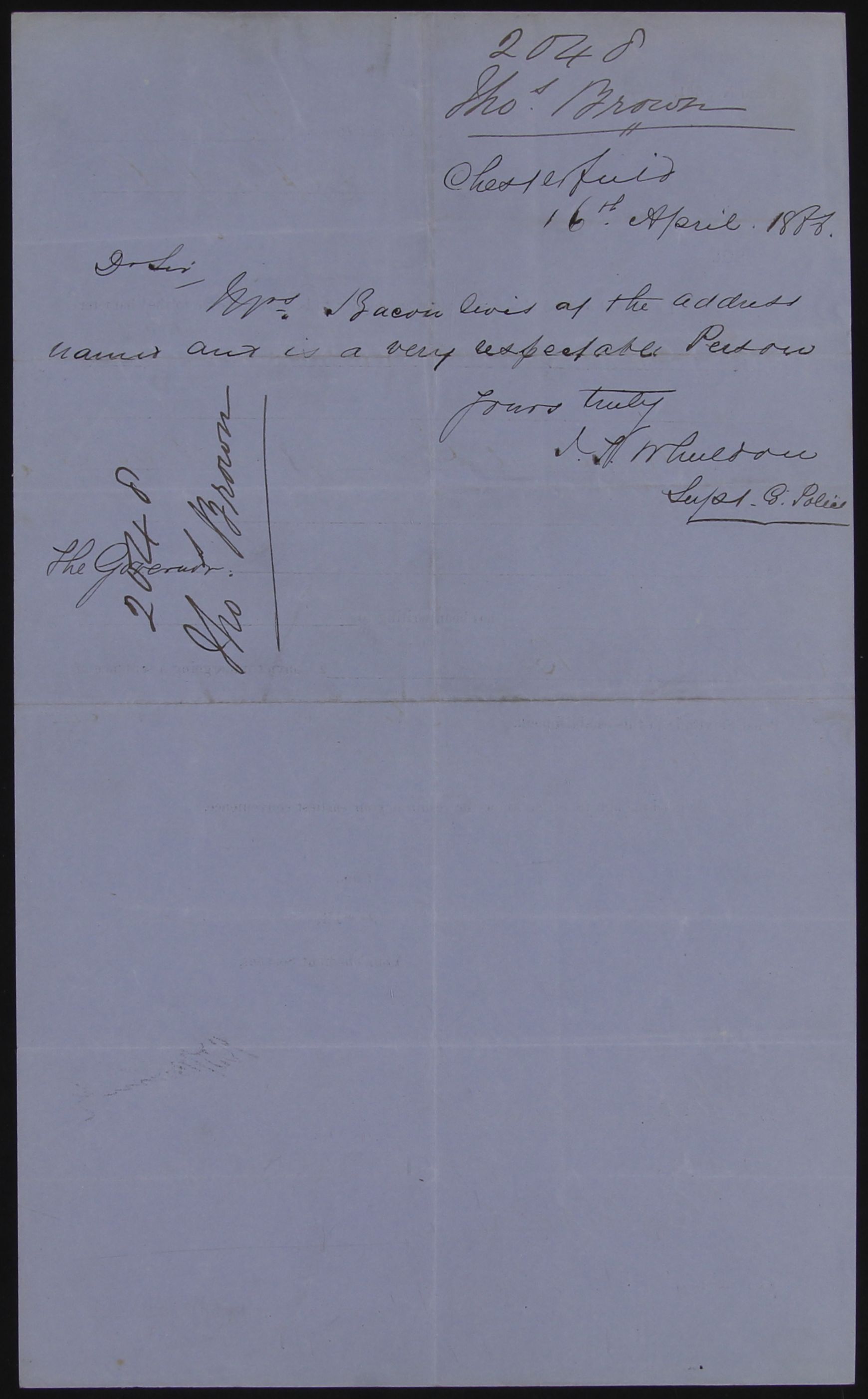 Thomas was released early on licence in November 1866. 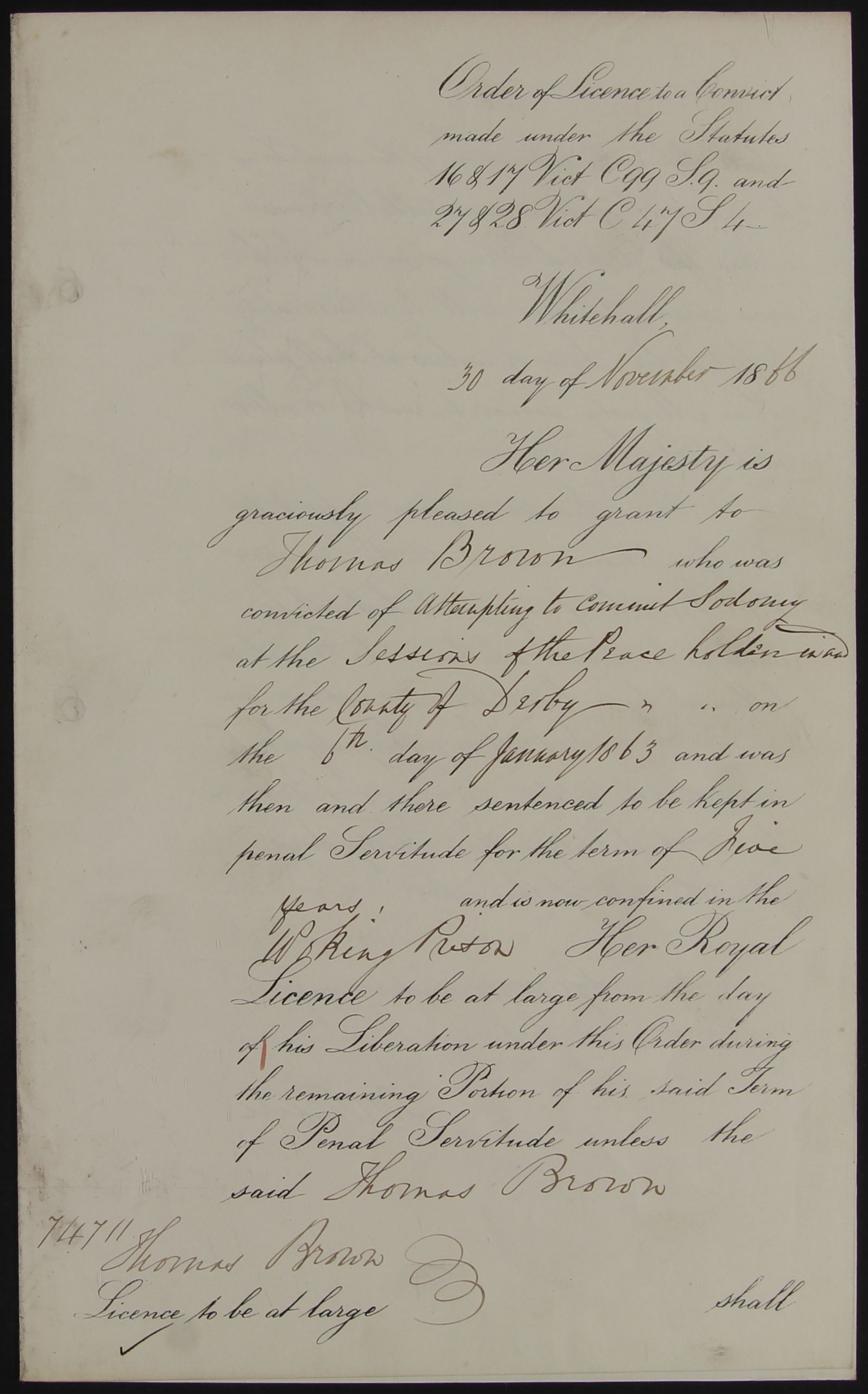 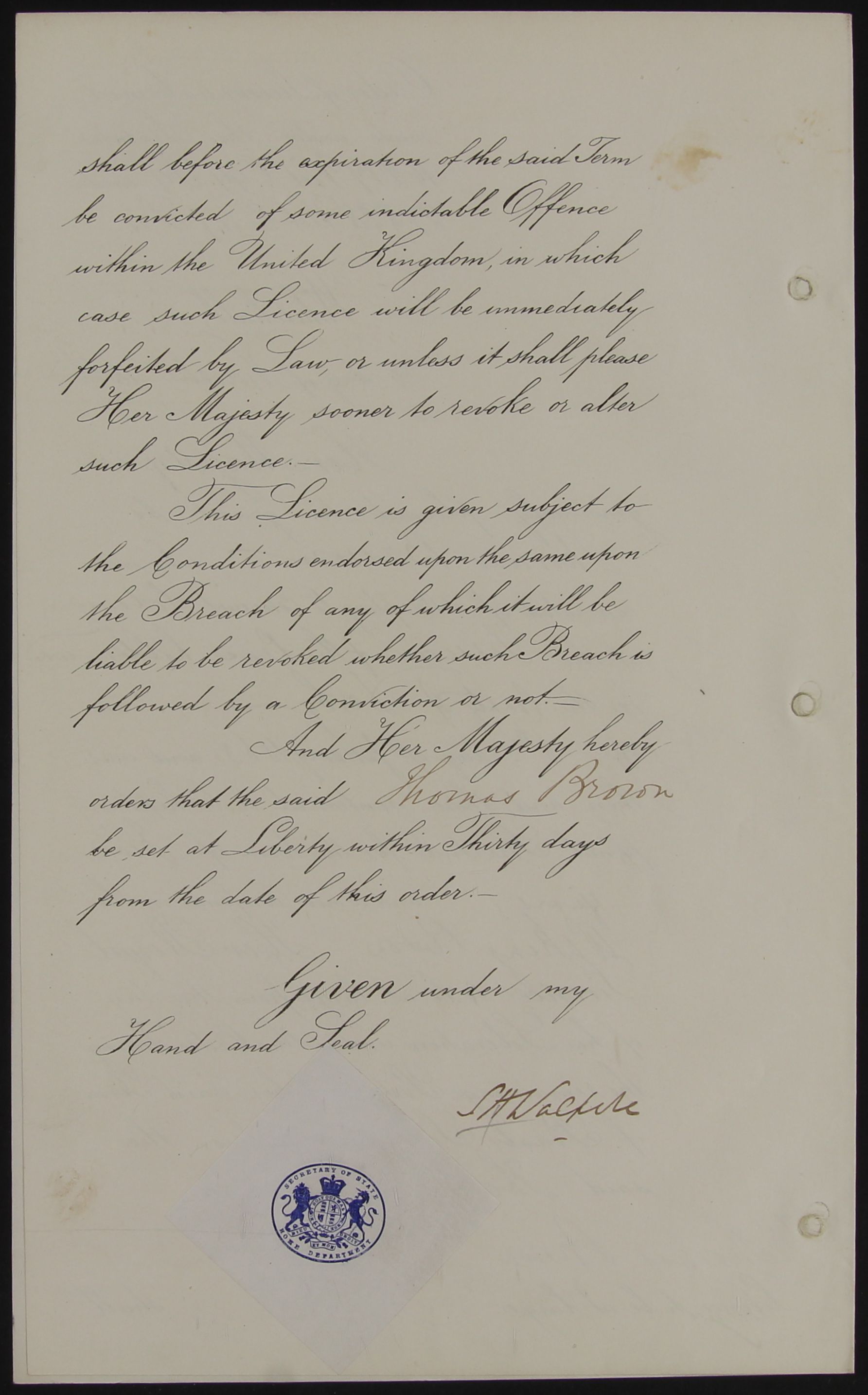 William was born in 1843 to William and Charlotte Pitchfork in Warsop, Nottinghamshire. The 1851 census found him living with his mother who was listed as a pauper, and his older brother Samuel who had been an infant on the 1841 census. On the 1861 census he was listed as a coal miner, boarding with the Turton family at Speedwell Cottages in Staveley. His prisoner record reveals that he was committed for trial on 12th November 1862, the day after the offence had taken place, along with the facts that William was 5’6″ tall with brown hair, grey eyes, and a fair complexion. 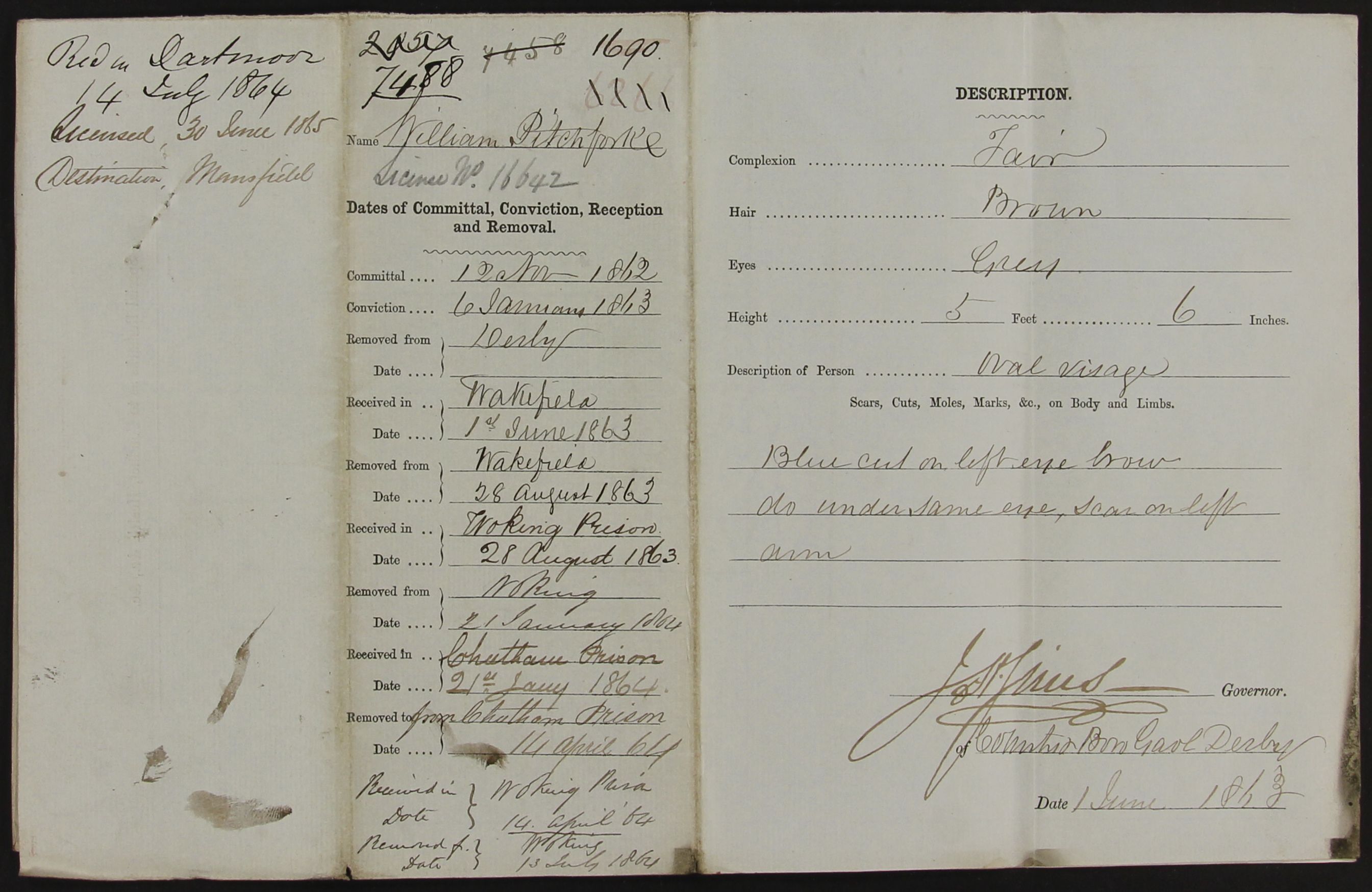 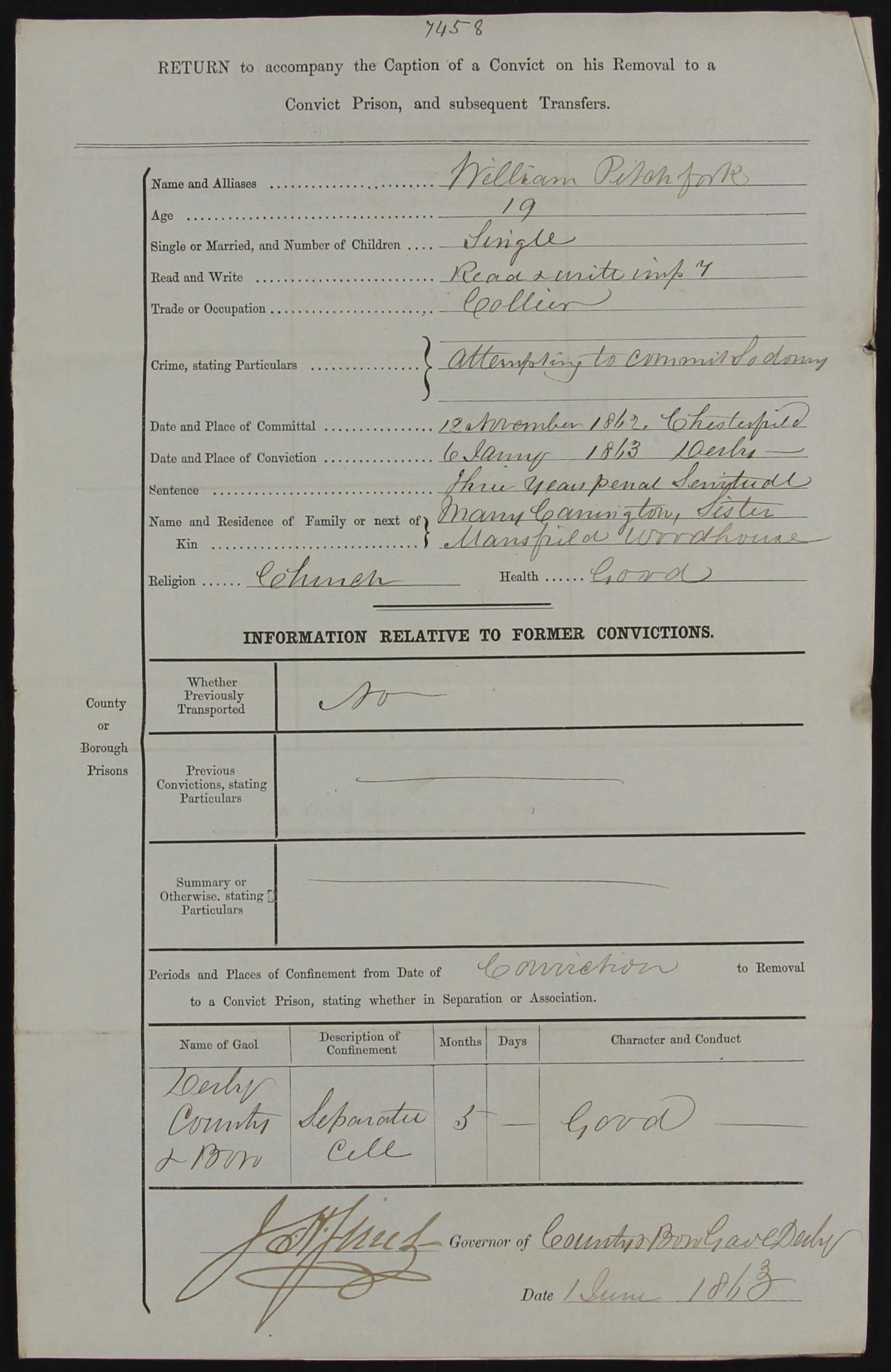 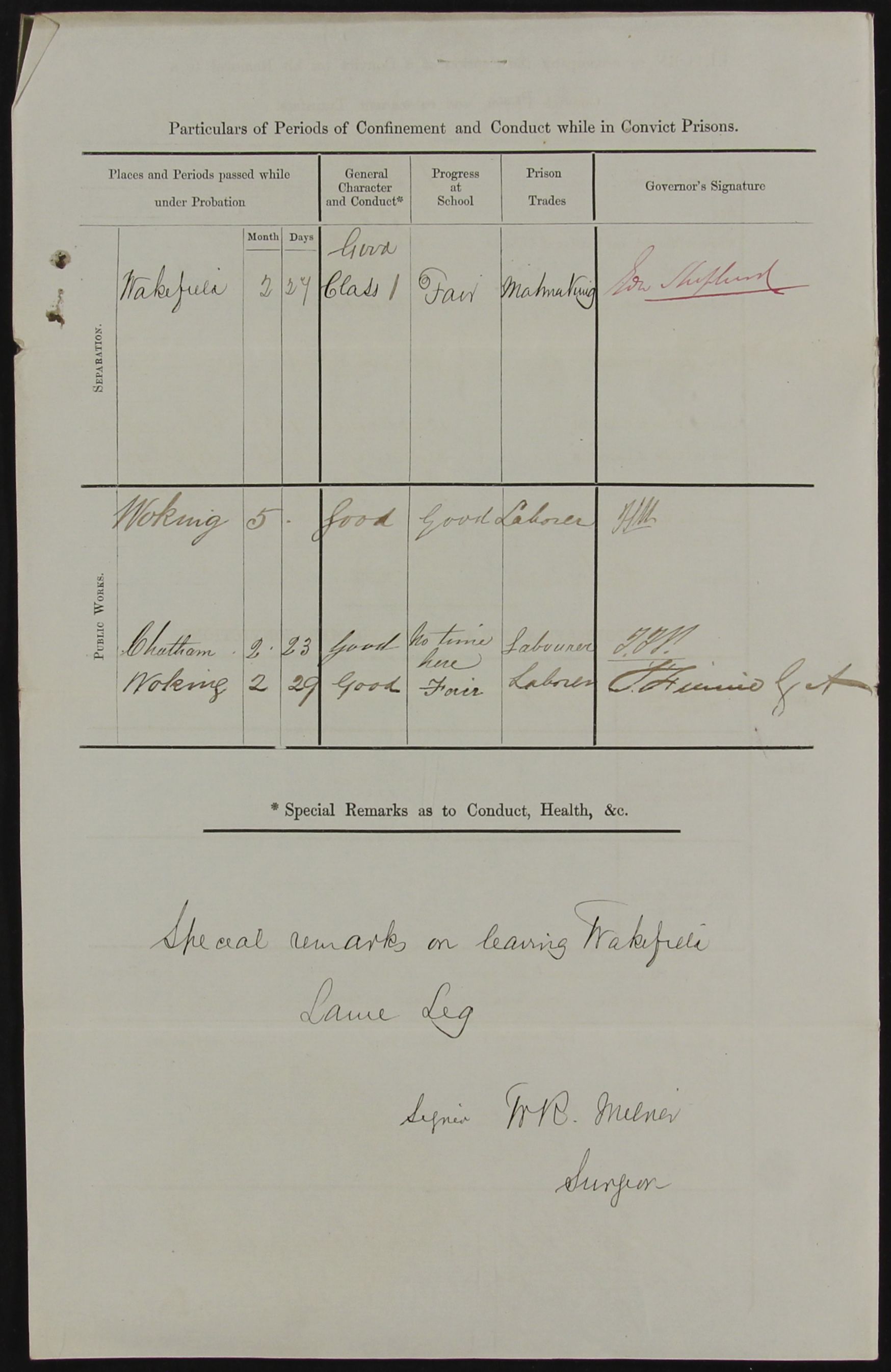 Once convicted, William was moved around the prison system. His conduct and character were described as good, with fair progress being made at school, though he did have one entry in Dartmoor Prison misconduct book for striking a horse – which resulted in the horse breaking the shaft of a cart. It wasn’t serious enough to stop him being released on licence with conditions in May 1865. 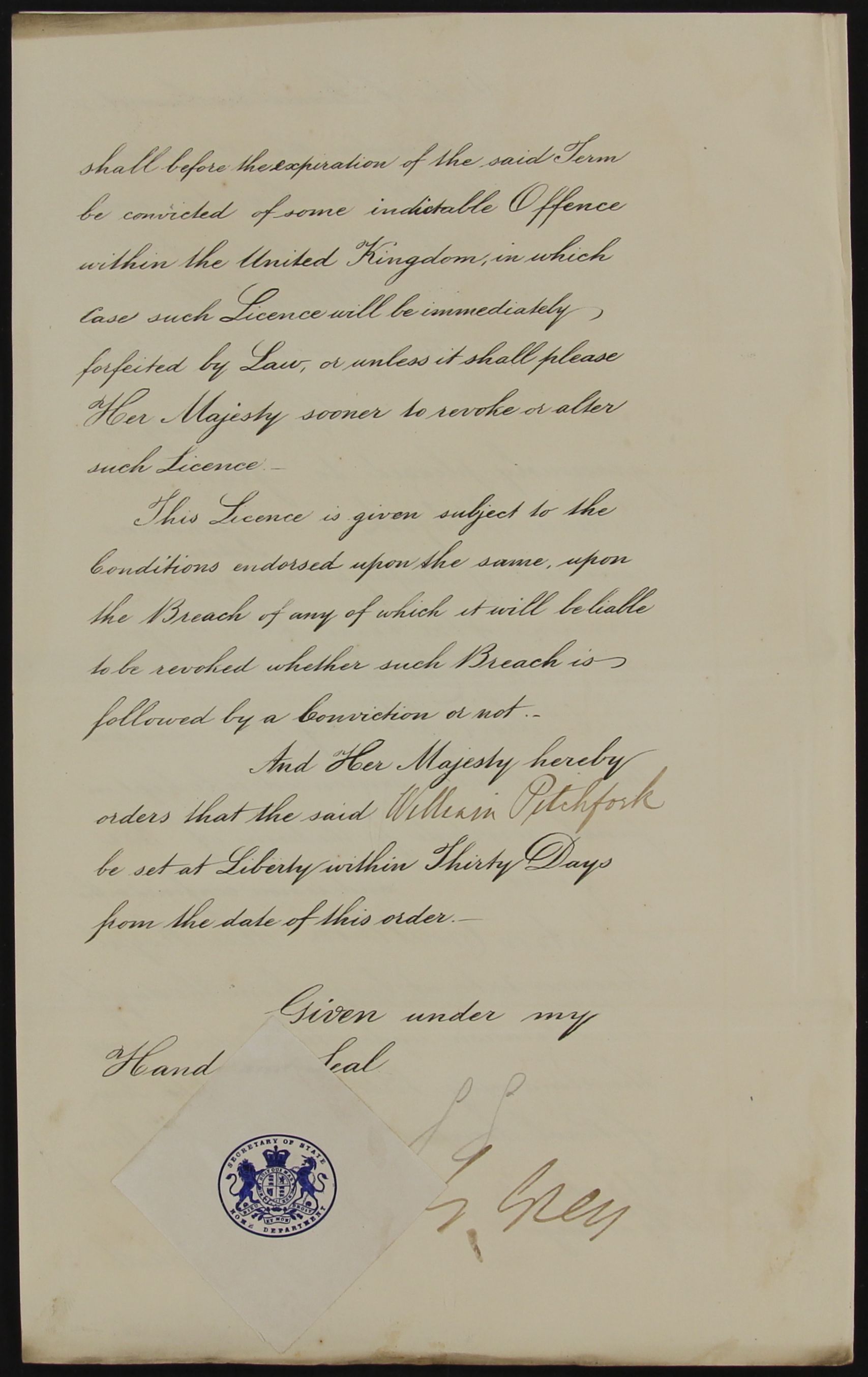 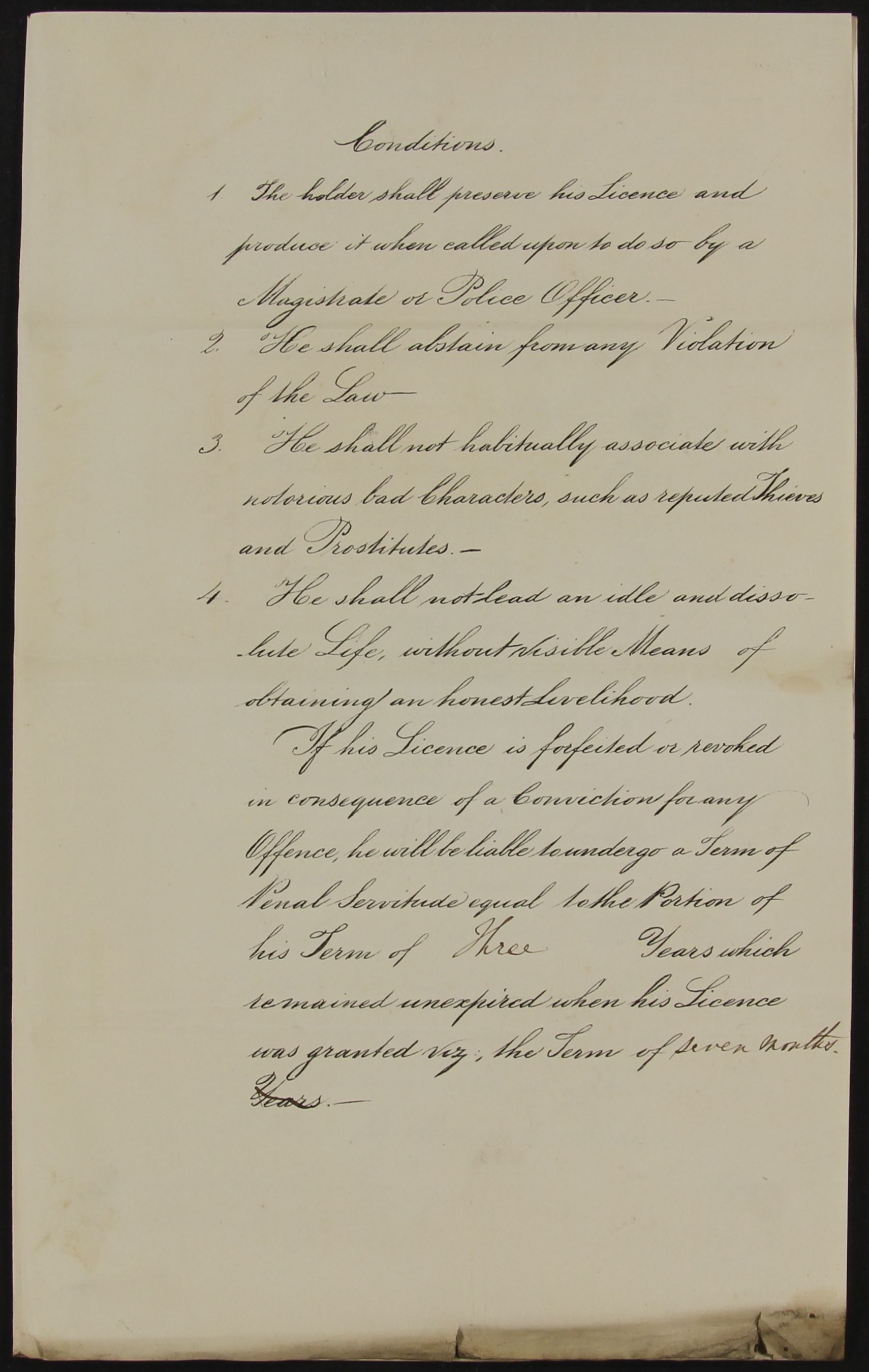 After his release I think William married Mary Clark on May 20th 1866 back in Mansfield Woodhouse. By the time of the 1891 census they were living on the High Street with their four children. William, who was still listed as a coal miner in ’91, died at some point before the 1901 census which lists Mary as a widow still living at home in Leeming Lane with three of her grown children; William Jnr had set up home with his wife Annie Maria and their young kids.

EPS and EPP Foam in Car or truck Seats - What Does That Mean?

Fri Nov 18 , 2022
In browsing for a new auto seat, you normally come across terminology that you may well not recognize. What is this EPS and EPP foam the auto seat manufacturer retains boasting about? And what does it necessarily mean for me and my child? It is crucial to have as significantly […]